The Simple Guide to WSUS Maintenance and Optimization in ConfigMgr

In this article, we are going to break down the key factors involved in ensuring your WSUS server and software update point are healthy and optimized for performance. There are many excellent guides out there around WSUS maintenance, including Microsoft Docs.

Topics covered in this article:

Relationship Between WSUS and the ConfigMgr Software Update Point (SUP)

Before I dig into why WSUS maintenance is essential, let’s get a basic overview of how Configuration Manager interacts with WSUS. 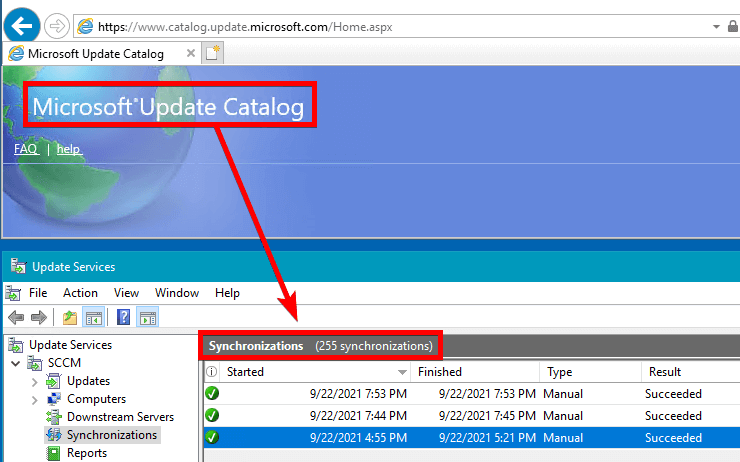 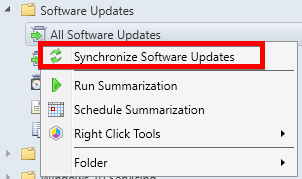 If you review the ConfigMgr log wsyncmgr.log, you can better see this happening in real-time. Here’s an example of some key lines in the wsyncmgr.log when synchronization is running. 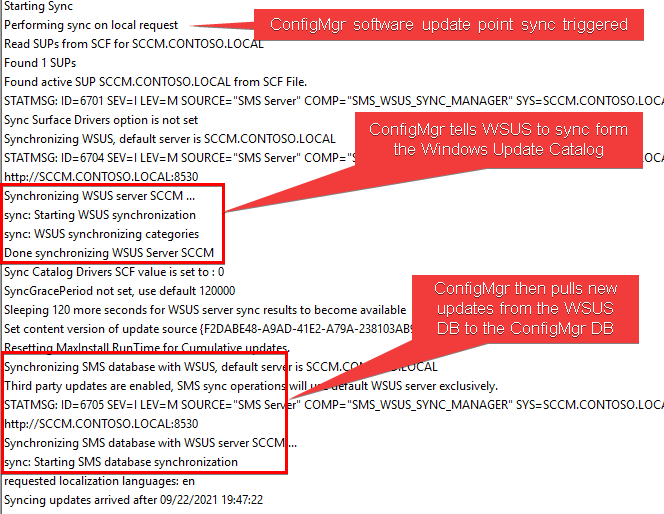 Note: In the past, the Microsoft Update Catalog was relatively small, and WSUS would often work great without any type of optimization. It used to be pretty common to hear in the ConfigMgr space that you shouldn’t ever touch WSUS.

As the Microsoft Update Catalog grew, the WSUS database did as well. As I recall, the issue of WSUS maintenance started to become a topic around 2017 when customers started to see timeouts due to an unmaintained WSUS environment with a large number of software updates.

The timeout error would generally show in the wsyncmgr.log as the following error:

Sync failed: The operation has timed out. Source: Microsoft.UpdateServices.Internal.DatabaseAccess.ApiRemotingCompressionProxy.GetWebResponse
Sync failed. Will retry in 60 minutes

At first glance, you may think this is a networking or proxy error since the logline contains the text “ApiRemotingCompressionProxy“, but it’s generally not related to the proxy at all.

It’s an API call to the WSUS Administration IIS website timing out when running a SQL query to get all published updates.

This issue generally happens because SQL maintenance such as re-indexing, custom index creation, and other WSUS maintenance steps have never been performed.

First, you should get a baseline of how your WSUS database performs before enabling any WSUS maintenance. The stored procedure below will retrieve all updates in WSUS. The spSearchUpdates stored produce is called during each software update point synchronization in ConfigMgr.

We would hope to see this query executed in under 30 seconds in a healthy environment. If the query takes longer than 150 seconds, you may have sync failures and other WSUS performance issues.

Step 2: Enable the Built-In WSUS Maintenance in ConfigMgr 1906 and Newer

The easiest way to ensure WSUS performs well and is optimized is to enable the built-in cleanup and maintenance process. To enable this, navigate to > Administration > Sites > Right-Click the Site > Configure Site Components > Software Update Point 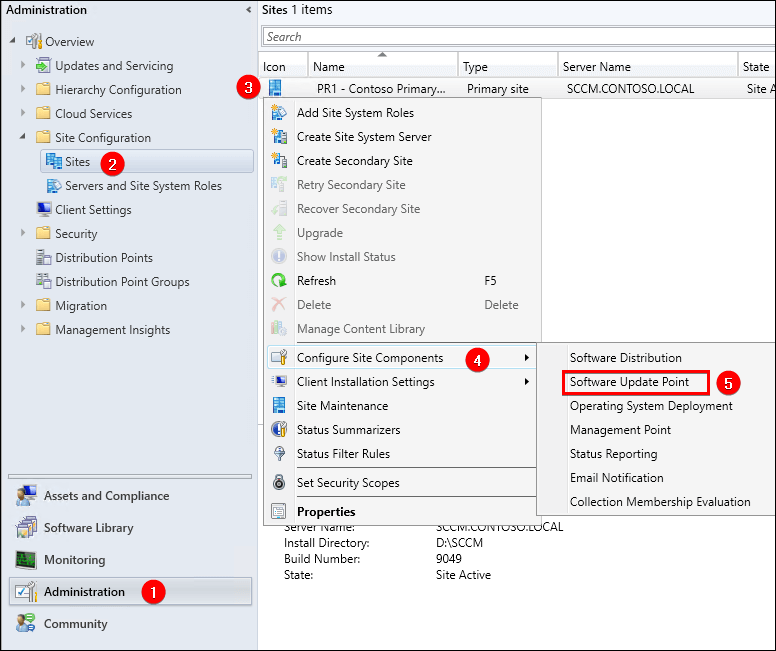 In the WSUS Maintenance tab, check the following checkboxes: 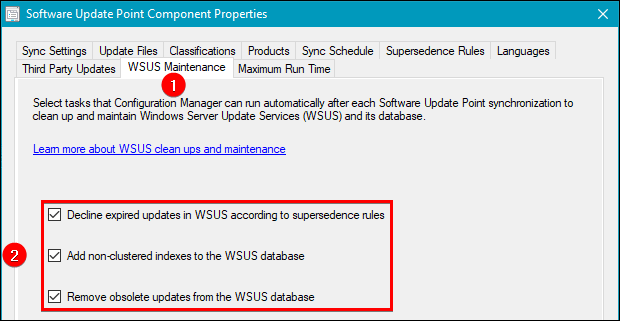 Once enabled, the wsyncmgr component will perform a WSUS cleanup after successfully synchronizing the software update point.

You can see the actions taking place in the wsyncmgr.log 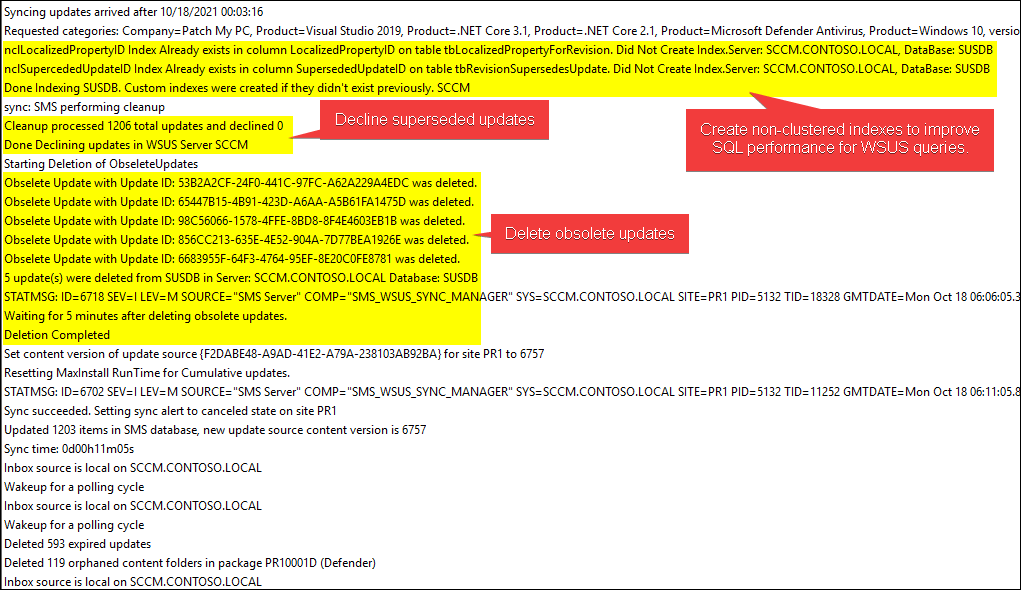 Important: Before the next software update point sync is performed, you should ensure the WsusPool in IIS is optimized using the steps below Optimizing WSUS AppPool in IIS for Better Performance to improve WSUS IIS performance.

Based on our research and information in Microsoft Docs, the single most significant factor to WSUS database performance and the root cause for timeouts is not having the custom non-clustered indexes on the WSUS database (SUSDB).

If you successfully performed a software update point sync after Step 2: Enable the Built-In WSUS Maintenance in ConfigMgr, the non-clustered indexes should be automatically created. However, there are a few scenarios where the automatic creation may fail:

To verify the non-clustered indexes were created automatically, copy the following SQL Query and ensure the result of the query in SQL Management Studio returns nclLocalizedPropertyID index exists, and nclSupercededUpdateID index exists

One WSUS optimization that is not automatically enabled is changing the WSUS Administration websites AppPool settings in IIS. Per Microsoft’s WSUS best practice, you should perform the following changes. 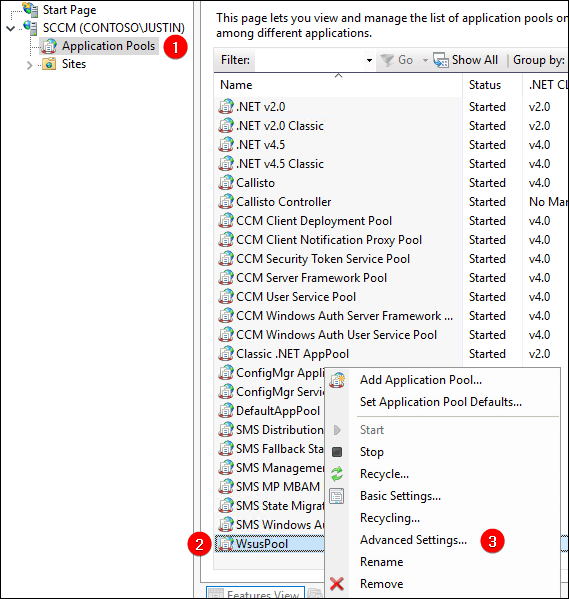 In the Advanced Settings pane, perform the following changes: 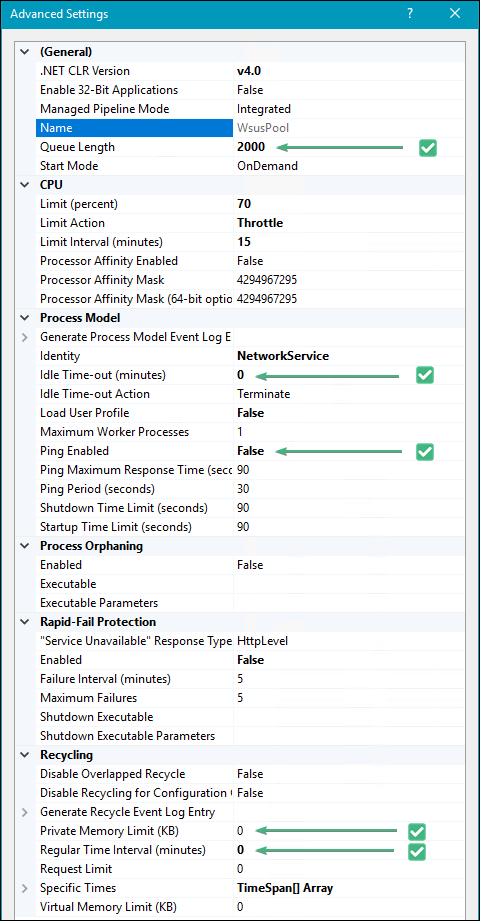 Step 5: Check for Un-Needed Products that are Enabled

We also highly recommend reviewing the products you have enabled to see if there are any products that are no longer needed. For example, it’s not uncommon for us to review this with customers to find unsupported products such as the following enabled: 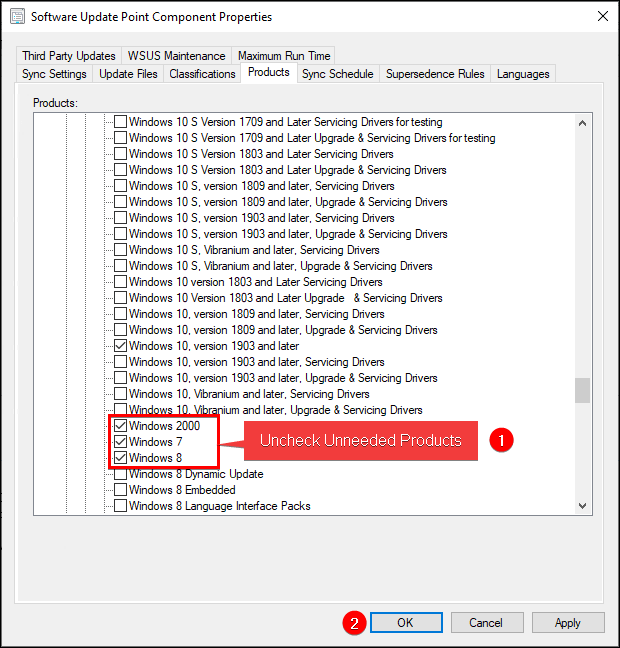 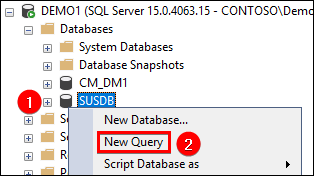 Copy and paste the T-SQL script from the Microsoft Docs article Reindex the WSUS database and click Execute. 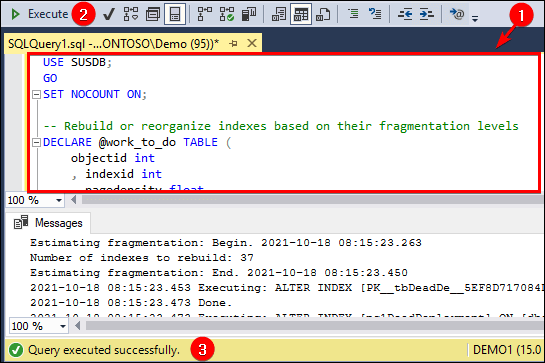 Note: The Reindex the WSUS database T-SQL script can take some time to complete depending on how fragmented the WSUS database indexes are. We also recommend you set up a SQL maintenance plan to re-index the database on a schedule as described in the following video: Top 10 Tips for Optimizing WSUS Performance and Reliability

There is a scenario where the Built-In WSUS Maintenance in ConfigMgr may not work if you are already in a very unhealthy WSUS state. If you recall in the step above, the WSUS cleanup and maintenance is performed by the wsyncmgr component and only after a successful software update point sync.

If you are already in an unhealthy WSUS state, you may constantly be receiving timeout errors as shown below in the wsyncmgr.log:

Sync failed: The operation has timed out. Source: Microsoft.UpdateServices.Internal.DatabaseAccess.ApiRemotingCompressionProxy.GetWebResponse
Sync failed. Will retry in 60 minutes

When this happens, the WSUS clean up task will never trigger because it only occurs after a successful software update point sync.

If you happen to be in this unhealthy WSUS state, you will need to manually perform some of the tasks generally automated by Built-In WSUS Maintenance in ConfigMgr. After manually performing WSUS optimization and you are able to complete a successful sync the built-in maintenance can take over.

We found performing the following two actions will generally be enough to get WSUS in a state to successfully sync.

Paste in the SQL Query from Microsoft Docs to create the WSUS custom indexes and click Execute.

If you prefer learning by video, you can check out the deep dive video we did on WSUS performance and reliability below 👇