Since releasing our new SCCM application creation and management feature a few weeks back, we have noticed some customers opening cases with regards to trouble getting the applications to install during an SCCM operating system deployment task sequence.

When our service creates applications in SCCM, we use a Powershell script for the detection method of the deployment type, as shown below. 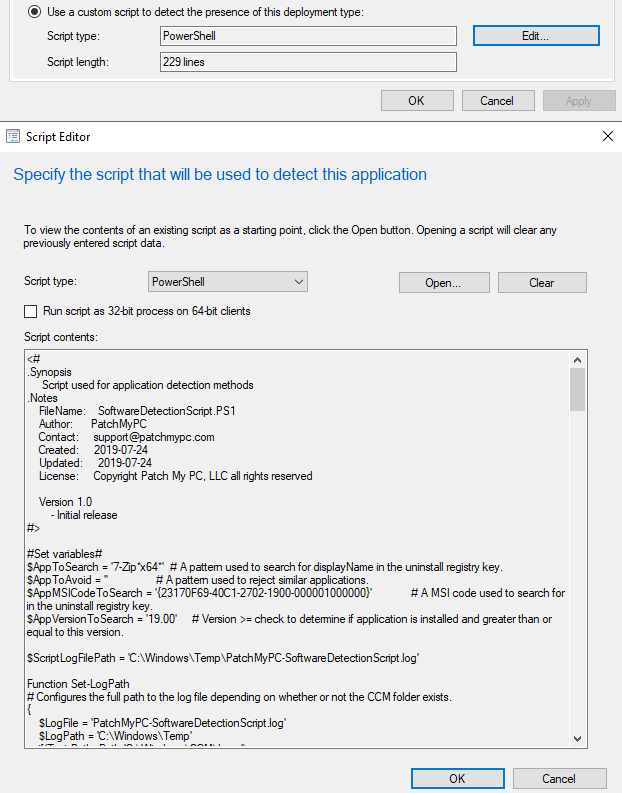 When the device gets to the install application step, the device may fail to execute the detection method script if you are using a self-signed WSUS Signing certificate and the Powershell execution policy is not ByPass.

If the detection method script fails, it’s because the WSUS Signing certificate used to code-sign it isn’t trusted during the operating system deployment on the client-side. This trust failure is due to the fact that the device wouldn’t have received group policy or the client policy if you are deploying the certificate using SCCM to add the certificate to the Trusted Root and Trusted Publishers certificate stores.

In the C:\Windows\CCM\Logs\AppDiscovery.log, you will also be able to see the failure when the SCCM agent tries to call the detection method script. It will contain lines similar to the image below.

Now that we see the cause, the resolution is pretty straight forward. You need to ensure the WSUS Signing Certificate you are using for third-party update publishing that is also used for signing the scripts is trusted before the install application step in SCCM.

The first thing to do is export your WSUS Signing Certificate from the publishing service. In our example, we saved the file as WSUSSigningCertificate.cer

Now that you have the certificate used for signing the detection method scripts, we need to import it on the client-side during the task sequence before the install applications step.

Luckily this process is pretty easy, and we’ll show you how. First, you can download our script Import-Certificates.cmd that can be used for importing (.CER) files into the Trusted Root and Trusted Publishers.

You will want to save the Import-Certificates.cmd file in the same UNC folder as the exported (.CER) file. In our example, we used the folder path \\sccm\Sources\Scripts\Install-Certificates

The batch script is very straight forward. It will import all (.CER) certificates that are in the same folder as the script to the Trusted Root and Trusted Publishers certificate store. The REG ADD command on line 5 is optional, but it can be helpful if you want to also install third-party software updates using the Install Software Updates step in the same task sequence.

Next, you need to create a legacy package in SCCM (No programs required if you only want to install the certificates via task sequence). If you’re going to deploy this using software distribution to existing clients outside a task sequence, you can create a new program for the package the runs Import-Certificates.cmd as the command line.

When creating the package, use the UNC path that you saved your (.CER) certificate to as well as the Import-Certificates.cmd. In our example, we used the path mentioned above. This package is used for accessing the content in the task sequence.

Lastly, you need to add a Run Command Line step before the Install Application step. Within this step, be sure to set the command line to Import-Certificates.cmd and enable the Package option and reference the package you created in the previous step. 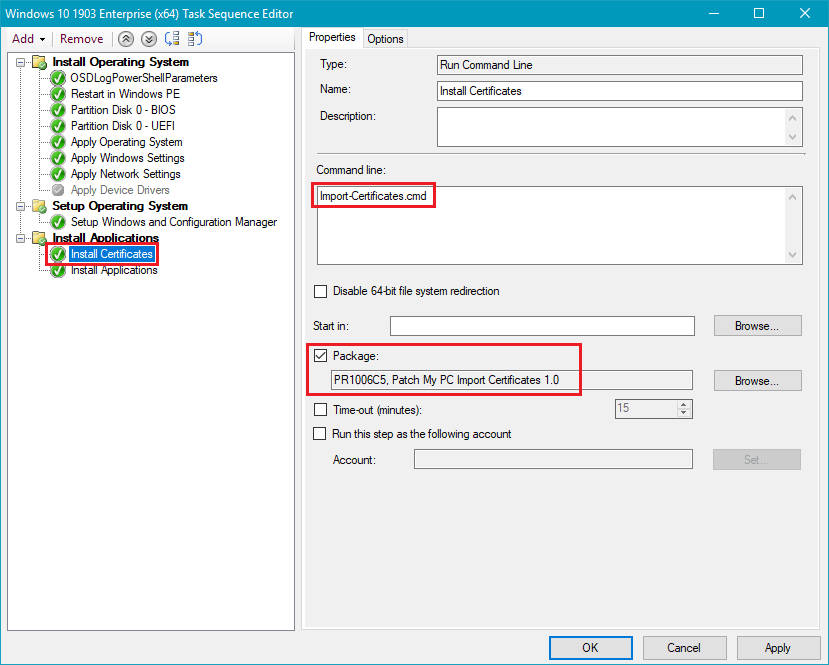 That’s it! Now that the certificate chain is trusted before the Install Applications step, you shouldn’t receive the trust error when the detection method script is executed.