This section allows you to view all posts made by this member. Note that you can only see posts made in areas you currently have access to.

Support and General Questions (Enterprises Using ConfigMgr and Intune) / Re: No Log Files From Application Update

August 30, 2022, 03:41:39 PM
Hi Eddie
We allow you to set options Globally at the All Products level but that doesn't mean that the code from the vendors installer file will allow all of those options.  Adobe is one of those vendors that doesnt give us those options. 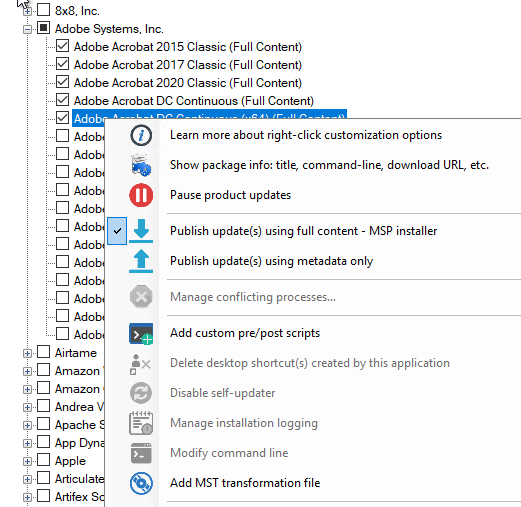 August 30, 2022, 03:30:30 PM
Hi Eddie
That should not cause a reboot, there may be another process that caused it. The switches run with that can be found by looking at the show package info or looking at the Modify published updates wizard which is a look into WSUS.  https://patchmypc.com/modify-published-third-party-updates-wizard

Support and General Questions (Enterprises Using ConfigMgr and Intune) / Re: baseapplicabilityrules.xsd not found

August 30, 2022, 03:19:39 PM
Hi
Could you submit a support case for this on https://patchmypc.com/technical-support
Please include the logs from the publisher by clicking on the collect logs button on the General tab.  We need to dig deeper into what is going on.
#5

Support and General Questions (Enterprises Using ConfigMgr and Intune) / Re: Disabling apps updating themselves when PMPC option is greyed out

August 30, 2022, 03:16:15 PM
Hi Joe
For adobe that would done when you created the custom MST file using their tool to apply to the install or in scheduled task you can turn off their updater  https://www.wintips.org/how-to-disable-automatic-update-in-adobe-reader-dc/, Notepad ++ is a little more difficult  https://community.notepad-plus-plus.org/topic/19241/disable-auto-update-checking-and-update
#6

July 25, 2022, 01:47:23 PM
Lee
The user deferred the installation from the manage conflicting process options you have set. You can modify those in the publisher, here is the link to the documentation: https://patchmypc.com/manage-conflicting-processes-when-updating-third-party-applications
#7

July 12, 2022, 02:45:46 PM
Hi Eddie
Having a Q&A session would be better t explain this process since you are new to Cm and PMPC. Please schedule some time fromo the following link: https://calendly.com/patch-my-pc-live-demos/patch-my-pc-environment-review-session

Support and General Questions (Enterprises Using ConfigMgr and Intune) / Re: How to handle user-level app updates

Support and General Questions (Enterprises Using ConfigMgr and Intune) / Re: What is the best way to add keywords to an application?

June 23, 2022, 09:42:29 AM
Hi currently it would not save that modified keyword, this would be a great idea for our developers to look into, submit this idea to https://ideas.patchmypc.com/ideas/new
Be sure to sign up and they will let you know the status.
#12

April 07, 2022, 04:45:33 PM
Hi tbruneau
It may be best if you submit a support request from https://patchmypc.com/technical-support and include the following logs from a client. https://patchmypc.com/collecting-log-files-for-patch-my-pc-support#update-troubleshooting-client-logs  be sure to include any relevant screenshots and plugin information.
#14

March 14, 2022, 09:09:32 AM
Unfortunately, we install and then run commands to delete the desktop icon but when the fist user logs on Google Chrome will default to creating a desktop shortcut to the users desktop if one isnt in the public users desktop.
#15

Support and General Questions (Enterprises Using ConfigMgr and Intune) / Re: How to use Transform File Correctly